NASA Can’t See The Forest For The Trees

I don’t like others to tell me what to think. It seems there is a lot of that going around lately. These pictures are from the “Mars Anomaly Research”. I am really interested in what they imply. The more I look at Mars the more I think the NASA scientists are in denial or liars. How long are we going to believe the answers they throw out which just do not cover, or in any way, explain what we are seeing? Many feel we are constantly treated with compete contempt and disregard by this tax supported agency. But most of all, how stupid do they think we are? I don’t know for sure if this is life but it is not rocks or the dark soil underneath.
First we have the main Mars photo without magnification. 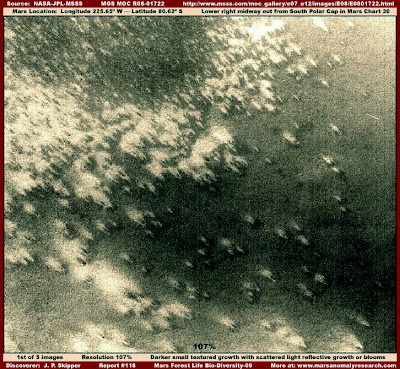 “The above first image evidence is not something that I would normally report on simply because I doubt that very many would be able to distinguish this from geological terrain. This type of evidence is common in the Mars distant obfuscated satellite imaging. I pass over reporting on evidence like this often because I suspect many would see this as just too inconclusive. Yet it is biological life and it is included in this report because it is present in this strip and it demonstrates yet another example of a different looking Mars forest life bio-diversity.” 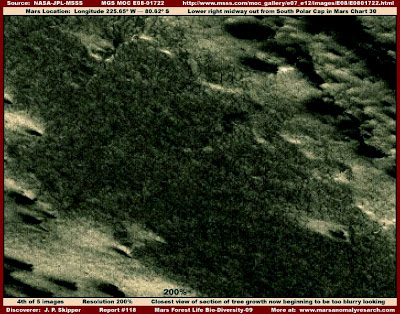 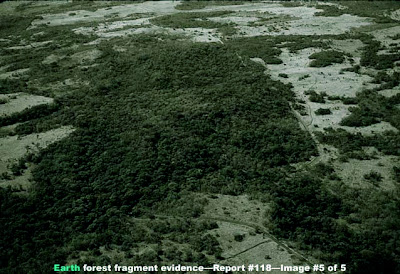 “The above (2nd) .. image is a 200% zoom factor closer view of a section of the Mars vegetation forest evidence. I have not imaged the bands of algae growth evidence or other growth on either side of this band of tree evidence because the main thrust of this report is the conventional vegetation woody forest tree evidence. This view is just beginning to get a little too blurry but it is still informative as to being able to identify this as mostly conventional woody tree forest fragment evidence.”

"Now in the above..(third) image I want you to compare the Mars vegetation forest fragment evidence in the previous 2–4 images to this similar looking Earth based hardwood forest fragment evidence. This Earth evidence comes as a more oblique closer aerial view without obfuscation tactics and resolution problems present in it and so the view of detail making up the forest canopy upper surface is of course better than in the much greater distant and resolution compromised Mars satellite imaging lacking in such subtle detail.”

.
The end results is these cursory attempts to explain Anomalies images by NASA and the debunkers that have fueled and reinforced the contempt many people feel toward NASA and their lock step debunkers.
As long as we accept these stupid explanations we will get stupid explanations. I am an activist in the political arena. I find the same contempt by politician in treating the public. They seem to think all we need to be concerned with are lower taxes, lower gas prices, never mind accountability. I have always believed there are Americans who are not that selfish.
The same can be said for NASAs utter contempt for the public unless of course it has to do with support for their next project. If you think I’m crazy try and pay to get any compete Shuttle mission video, the videos we paid for; but please don’t hold your breath.

NASA We Are Not That Stupid