Sorry for the lack of articles lately. Been taking care of some health issues. J. C.

You’re a MUFON investigator and your chief investigator hands you an ongoing case. It seems multiple witnesses were seeing “orange fireballs,” red and white lights in the Tennessee sky that would cluster…as many as 27 together.” This happened in April and you contact the main witness about these sightings. The witness claims this happens almost every night and you schedule an on-site investigation the following week. However, Mother Nature has a different schedule and the 2010 floods hit the good state of Tennessee. Locked down for another week you finally are able to get out to the person’s house who claims now the lights are coming closer and he is seeing helicopters. You pack your bag and you’re off to the UFO Witness’ house and the lights in the sky.

There you find yourself standing on a porch and watching lights dance in the sky. The witness suggests that you should drive out with him to the corn field for a better look. You agree and drive out in his truck. You bring an arsenal of equipment including EMF detectors, cameras etc. Almost as soon as you get to the field you see the different colored lights in all directions. As you stand in the cornfield you spot a pair of lights that are different and that seem to be coming closer. As the double lights continue to come directly toward the group you grab the cameras to get shots… but nothing works. All of the equipment is dead. You can’t believe your eyes as these lights go directly over you 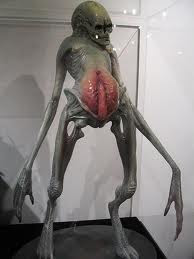 r head. There you see the silent object, a triangle, and it blows your mind away. After the object leaves, you turn to the equipment and find it working again. Then it happens. You get this intense uncomfortable feeling. A feeling you can’t deny…a feeling of being watched. You ask the others and in thirty seconds the feeling changes for everyone, from just being watched, to intense fear. The fear becomes so overwhelming that you and the group decide to run. As you and the group turn around, the main witnesses’ flash light shines across something astounding. “What the **** is that?’ he shouts as the figure becomes clear. There, standing in the beam of a flashlight about six feet away, is a “being”. You stare at this creature which is about “three and a half feet tall;” it’s eyes are not almond shaped and it’s legs are almost “twig like”. The sight of the creature and the intense feeling causes you and the other witnesses to flee the scene. When you get back you burst into nervous laughter along with the group. You compare stories…they match. Then, later, you gather your wits and return to the field and you find creature is gone and so are the feelings. You continue seeing objects, including a yellow light which ascend up through the trees. Is this the object that took the “being” away?

It one thing to go investigating for MUFON and see a UFO; it’s quite another to see an actual occupant. The new issue of the “MUFON Journal’s” January 2011, front page article by Chase Klowtzke describes this encounter. The lead investigator, Mr. Kloetzke, is a good writer and describes his feelings in great detail. I find his report quite convincing. He later goes on to describe how he shared this with only a hand full of people. He states at the end of the article quite clearly… “This was real. I am still amazed by the changes that one second in my life has made.”

If you had been there, would have run? Would you have been clever enough to understand these feelings were not your own? Would you have stayed despite those feelings? It’s one thing for all of us to write and discuss these creatures; it’s another to be standing six feet away from one. Kloetzke writes that this experience has made him a better investigator and I believe him. I don’t blame him for running but I often wonder what would have happened if he had stayed.