UFOs: Anatomy of a fraud

The need to believe.

What is the difference between a hoax and outright fraud? For me at lease, a hoax is perpetrated to elicit an emotional response while a fraud involves some type of gain be it monitory or otherwise. On the internet alone in 2009 fraud and scams were rampant:
“From January 1, 2008 – December 31, 2008, the IC3 website received 275,284 complaint submissions. This is a (33.1%) increase when compared to 2007 when 206,884 complaints were received. These filings were composed of complaints primarily related to fraudulent and non-fraudulent issues on the Internet”
http://www.consumerfraudreporting.org/internet_scam_statistics.htm

Has the UFO community been subject to outright fraud? I believe the Ray Santilli’s “Alien Autopsy” film and Jonathan Reed’s “Dead Alien” in a bag are two prime examples of UFO frauds. There are always groups of people in the UFO community who want to believe so much that to entertain opposite views are no longer a part of their UFO education. It is easy considering what debunkers do to UFO witnesses to just consider any opposite view a waste of time. But even in the face of hard core facts produced by good people within our community many still considered this as debunking. In one instance I was leaving the UFOIC in 2009 taking a shuttle to the airport with other attendees. There was a discussion between a UFO researcher and a producer of b-grade UFO movie short subjects. The produc

er, even though she was told Santilli admitted the film was an outright fraud continued to argue the film was real. The argument she presented of course ended up blaming the government…so what else is new? This loss of common sense is better understood if you remember what we are dealing with. If you see something so extraordinary and unexplained the very mention of it may change for worst the way people respect you it can become an emotional tornado. The more unbelievable the UFO/paranormal experience, the more the need not be judged. No matter what the John Wayne’s among our communities say being believed helps to bring closure to the shock of what you witnessed. This need, as human as it is, sometime creates great empathy for others and can be used by evil people for their own gain. This over extended empathy can make anyone valuable and subject to fraud.

We must all be reminded that sensational literature, books, DVD, can truly make money and any time money is involved our community must be over cautious. Books like “Communion” and “Day after Roswell” make millions of dollars. This potential payday could easily perk the interest of unscrupulous people who view you and myself as nothing more than fools.

“Dr.” Jonathan Reeds is a prime example of how to fool most of the people some of the time. This guy constructed the perfect con for the UFO community. The first thing a con must have is someone or something to back up his or her story. Good old Jonathan had video, photos and a friend. The friend “Robert Raith” went along for the ride. Now what is so great about Reed is he had no real evidence even to the extent that “Dr. Jonathan Reed had no past.

Here is a quick synopsis of his description of the encounter from the UFO Casebook:

On the day in question, Reed's dog was sniffing around in the brush until something caught her attention. Suzy bolted ahead of Reed who soon heard her barking. In a moment or two, the barking turned even more ominous sounding. Reed was sure that Suzy was in a fight with a wild animal, maybe a bear. They had spotted one earlier in the day. Grabbing a large tree branch to ward off some fierce competitor, he finally came close enough to see the cause of the struggle. To his utter shock, he was staring at a being beyond his wildest imagination.

The beast was moving at lighting speed, and vibrating simultaneously. The beast grabbed Suzy and began to tear her to shreds. Reed yelled, and caught the attention of the beast, who stared at him in a fierce, menacing fashion. Somehow, Reed managed to crack the beast on the head, supposedly killing it. The creature was about 4-5 feet tall, but had more mature features than its childlike size would indicate. The creature was wearing a one piece, seamless, black garment, which rejuvenated itself when cut or torn. Reed, exhausted from the emotional, adrenaline flowing ordeal, rested for a time, contemplating what to do.

After a period of two hours, Reed heard a humming sound in the forest 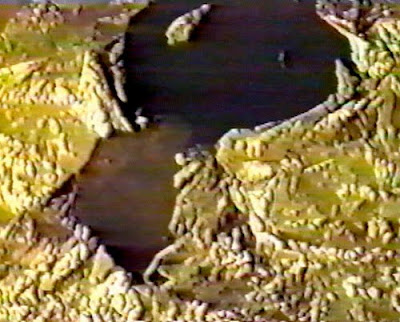 , and followed it until he saw a black obelisk hovering above the ground. Fighting off heavy, electrostatic laden air, Reed managed to touch the obelisk. Eventually, the humming stopped. He neither saw nor heard anyone... or anything else in the vicinity of the black obelisk. The doctor was sick, and totally exhausted, but tried to regain his strength. Darkness was drawing near, so Reed wrapped up the alien in a thermo blanket for the long one and a half hour journey back to transportation.

All the while, a thousand thoughts went through his head. Was what he had the discovery of the century? If so, how could he preserve and protect it? Arriving home, he placed the alien in a freezer in his garage. Soon he fell into a deep sleep. The next day, he went back to the freezer, took out the alien, and all the while manipulating the alien body parts, videotaped the creature.

He tried to find some friends to share the experience, but managed only one. He tried to hide his photos and videos with another friend, but the bulk of the evidence was ultimately lost, except for some that he managed to stow away.

Reed claims that he and his friend were followed everywhere they went, their lives threatened, and Reed's house ransacked. The alien, which had miraculously come back to life, was gone. Reed says that he had to live underground for 2 years, and could not get even one UFO group to help him with his story. He also claims to have been shot during the years following the ordeal. 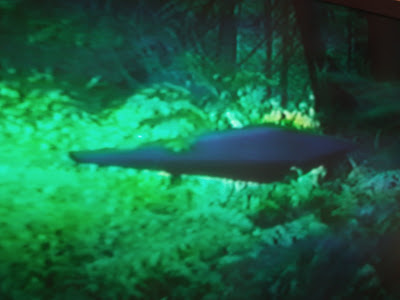 fall apart when people who knew this guy came forward to debunk his story:

“Bill Werner and Denise Charvet knew Jonathan Reed very well before October 1996, Both stated that his real name is Jonathan Bradley Rutter and told about information about his personal history that is contrary to what Jonathan has been stated on radio shows, in public lectures, Websites, etc,”

Oh but this didn’t stop people from believing Reed after all the government put these people up to lie about him. So as all good UFO researchers do they asked to have the video and photo evidence analyzed. Reed of course wouldn’t allow this, after all the government has the power to influence anyone and if they got a hold of these videos and these photos they would disappear.

So Reed and his buddy made the rounds on all the talk UFO radio shows. They continually promoted their book and made what I would think a nice little piece of cash. Those who challenged there story them were called debunkers by some in the UFO community.

Let me ask the reader this? How can we say on the one hand the premiere intelligence community has been able to keep the UFO/ET presence a fantasy in the public’s eyes for over 60 years and on the other hand will spend millions on suppressing a blurry video and a photo by a guy who has no real evidence?

In the following Video you will see a small group do exactly that:

We all should be empathetic towards UFO witnesses who come forward publicly about their UFO experiences. However, when there is money involved we must be very cautious. There are people who will do anything for money including murder…faking a alien encounter would be nothing for people like that. Hoaxing and frauds do more to discredit the reality of UFOs and alien encounters than all the debunkers put together. It’s up to us to use common sense and independent evidence before we defend a story as being true and make real fools of ourselves.