"Other people talk we investigated": MUFON

In September 2007 I founded the "NY UFO Meeting Group' simply because there were none near me. I started the group in Brooklyn but after a few meetings we moved it to Manhattan where It was barren of any such UFO meeting. When I had my second meeting in Manhattan someone attended and tried to sell something, so from then on it became a non-commercial group. I felt people should have a safe place to come and talk without feeling obligated to buy something. The meeting was getting very large and we were offered a room for a while but of course in Manhattan no one is lucky enough to get a room for free for long.

We eventually moved to the "Starlight Diner" which is kind enough to allow many groups to meet there and talk. Of course this arrangement can be noisy at times but we counted out blessings. We now have some steady members and we always have new and interesting people in attendance every month. For me the group ended up with the best people I could hope for. One of my members has been in attendance from the very beginning, a skeptic whose opinion I value and respect. This helps us stay grounded as he and I go over anything presented in videos and photos debating different explanations.

The rules of the meeting are simple no selling and always treating each other with respect. My member list contains over a hundred names but this reflects the people on the mailing list rather than people who actually attend.

New York is an interesting city and very quiet now when it comes to UFO sightings. We do get people who have sightings and they are usually from the outer boroughs or from people in Manhattan who go up to the roofs and do some UFO spotting or star gazing.

I decided not to make my meeting a part of MUFON because I had problems with the way MUFON's top people treated witnesses. Anyone who has followed my blog should know by now what I think so we won't go into that. As the meeting progressed I felt there was something missing. Although it was fun each month to have a meal and converse about UFOs I felt we could be doing more to help substantiate UFO witnesses experiences in our area.

It was then that I went to the 2009 International UFO Congress and witness some very strange objects through night vision scopes. This gave me the idea of doing UFO spotting with the group. This goggles and monocular were extremely expensive so the only way I could get one was to go in with two scientist friends of mine who witnessed the same objects. We were lucky because we found one on ebay, a Generation 3 night vision monocular for 900 hundred. We bought a 3 X lens for it and we were on our way.

However sharing a scope would not be the best way to go UFO spotting with the group because we all lived in different parts of the country. The other part of the puzzle was where do we go? New York was certainly not Nevada or Arizona the night sky in New York is so light polluted that even using a deep sky telescope will have it's problems.

We had one success story with one of the owners who lived in New Hampshire, He watched through the goggles one night as a object moved quickly across the sky, stopped and change direction just as quickly. This was before the video attachment so we didn't have it on video. I know a physicist who has a extensive lab and work shop. He made an attachment which would allow the Night Enforcer to video what it sees. It seemed too heavy for our purposes so I used his idea shorten it and made it out of wood.

The ITT Night Enforcer with Sony and 3 X lens attachment: 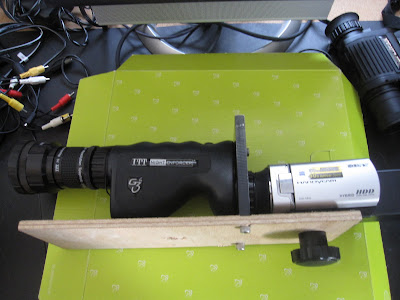 Some in the group weren't interested in UFO spotting but we did end up with a core of people who were dedicated to going on these expeditions. This summer I received the goggles for a few months and put them to use in the NY area. We have gone on two expeditions, so far without any success. Our first was in Pine bush New York famous for its high strangeness and UFOs. Vinny Polise who wrote a book on Pine Bush graciously helped us out. The problem with Pine Bush was it basically is it is now UFO spotting proof. Over the years, because so many people went up there UFO spotting and had very little respect for owners property they have no trespassing sighs all over the best spots. We were very respectful of their wishes and eventually did find a great spot to watch for UFOs. Although we didn't see UFOs the group had a great time watching satellites, meteorites and the thousands of fire flies that lit up the night sky behind the famous Jewish Cemetery.

Vinny Polise had told me about a scope made by Xenonics call the Supervision. It was different and they had one version where you could attach a cable for video out. One of the greatest stores I have had the privilege to deal with is B&H Photo. They have a policy where you can try certain products out for fifteen days with full return price if you don't like it. So I purchased it for a 15 day trial. It came to about two thousand dollars.

Xenonics Supervision with video out: 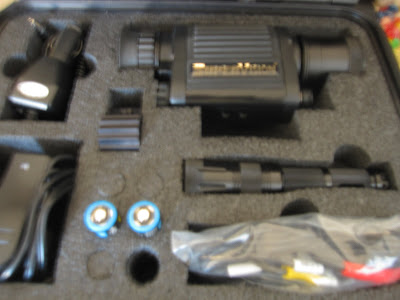 I quickly found that the cable out with this scope didn't work the way I had wanted it. You really had to use a capture program and when I tied it with some programs and although it recognized the monocular the signal was so weak I couldn't catch any video. So we didn't use that part of it but we tested It along with the Night Enforcer on our next expedition in the Bronx. Some like the Gen 3 best but I liked the Supervision. They had a cheaper version without the video out and attachments for about 900 and I vowed to would buy that version as soon as I saved enough money. Our Bronx exclusion was a wash out because out of nowhere a front moved in making sky watching impossible. I felt bad because one member had travel far to do some viewing and by the time he got there we were wrapping up. The great thing about our group is they are adults and they understand.

I don't know if any of you believe in "serendipity" but I had it happen so many times in my life that I find it hard press to believe it just an accident. I knew that one part time scope wouldn't do it so even though I didn't have enough to buy Supervision I started to look around for another scope. By complete accident I found a monocular that had video out, use the same method as supervision, and was much cheaper. The night owl IG /20/20 monocular goes for 400 plus at B&H and once again I thought I would buy it and test it out. The unit which I thought would be equal to a Gen 1 ended surpassing my expectations and unlike the Supervision it's video out didn't need a capture program. I was more than please with this scope and decided to keep it. About this time a Supervision without video out went on Ebay starting at 550.00 but before I bid the person took it off. I emailed her and asked her if she would take 600.00 for it and she agreed so at the end of this I had three night vision monocular, one with video out. I owned an old Sony camcorder with video in and it worked fine with it.

Night Owl with Video out and Supervision: 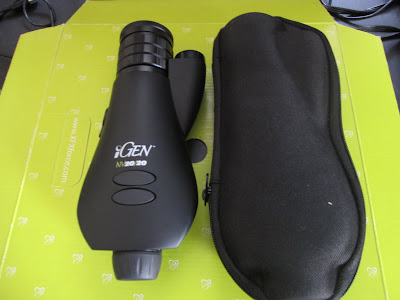 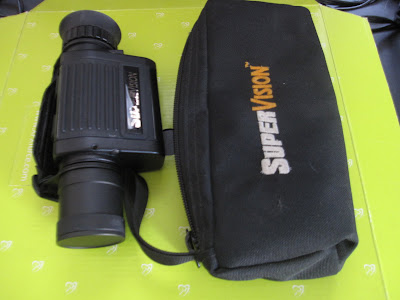 I had wanted to get a car adapter that could charge any 120 volt device including a laptop. While I was at Staples I saw one which was perfect sitting in a clearance crate labled under 5 bucks. I brought it to the sales person and she told me it was in the wrong box. The original price was 59 dollars and it was on sale for 19.00. The manager was there and she told the salesperson to give it to me for the 5 dollars and I ended up with everything I needed to start a real well equipped mobile UFO spotting club. . I had been waiting all year to spend my birthday/Christmas money and this turned out better than I had ever hoped for. We had a member Julio who has some smoking 35mm camera equipment with great lenses and also a powerful professional pair of binoculars. He had brought them to our previous sightings and they we mounted them on tripods.

I sat there stunned as I look over the equipment I now had. We could in many ways validate any UFO flap or multi-contact individual if we could get there within time. At this point the group will meet on the 22nd of August to discuss our future jaunts. John Ventre Director of PA MUFON is helping us and we may have a few chances to do just that.

The main reason I started the group was to help UFO witnesses have a safe place to discuss their experiences and people to relate to. I didn't want any external organization to tell me how to do that so the group was ours free and clear. At this point we may not only be able to encourage UFO witnesses to come forward we may also be able to actually validate their experiences with an independent source of documentation.

The future looks bright now if only those pesky ETs would cooperate.