As anyone who has follows me knows, I advocate for the UFO witness and their right to a fair hearing in the public eye. For those who don’t know Stan Romanek he is a modern era abduction story. Heralded in a book called “Messages” as the most “documented abduction case” I went to bat for him against non-other than James Carrion X-International Director of MUFON’s on accusations of possible fraud.

James nefariously got hold of a document that Stan claimed was left in his mailbox by a dark government agency warning to stop public disclosure of what was happening to him. Stan claimed the document had been checked and was deemed authentic. Stan never publically released the document nor was it reproduced in his book.

James showed a constant spelling mistake on a certain word in this document could be traced directly to Stan’s lack of command of the English language. It seems that Stan also had written up reports by other UFO witnesses names and submitted them to MUFON and you guessed it…same spelling mistakes. I decided to go to the defense of Stan.. My reasoning was this. We know that the government has harassed people before when they have gone public so setting a person up with a powerful abduction report is not beyond ones imagination. John Keel in his book “The Mothman Prophases” documents how a journalist was harassed by what seemed to be government types “MIB” by reporting on the sightings around the Point Pleasant Virginia creature sightings. This has been proven to have happened. So many cases throughout the history of UFO experiences prove some agency is very interested in people who have these ongoing experiences or those who report them.

One of the element I relied on in this case was that it had been investigated by good boots on the ground MUFON investigators like Daniel Sims and Aleiandro Rojas. First let me say that there is very little doubt that Stan has had some real experiences. He has had genuine UFO sighting with other witnesses some with MUFON investigators themselves. The other side of the coin is he also sensationalized the case with Jeff Peckman on the Larry King show by releasing what was reported to be a gray alien peeking in his window which he videoed. This video at the time was laughed at by most of the public as nothing more than CGI or a puppet. Also there were some rumors that this was not the original video and claims went back and forth clouding the issue.

James’s article left me with one big nagging question; why? Why didn’t the document get released and why didn’t the MUFON investigators catch this blatant spelling mistake. Stan’s book lack so much documentation that when I went to the “MUFON 2009 International Conference” I questioned him (he had a table) on the reasons behind this. His answer was the “Publisher” had control and that was the way they wanted it. It seems they were looking to do a DVD or something else.

Recently I received the new issue of “Open Minds” magazine which I consider a excellent contribution to the UFO field. The issue theme covered the most documented ET abduction cases in UFO history. In the issue was a interview and a report on the Stan Romenak case by none other than Aleiandro Rojas . I have to say I read it with great enthusiasm but came away somewhat disappointed. The controversial document was not covered at all in the issue. However the article had one of the equation he had written in his sleep. Stan had claimed a physicist had look at the equation and determined it was actually regarding element 115 which hadn’t even been discovered then. Stan claimed the aliens had told him they tried to give it to the government and they wouldn’t share it with the people so they gave it to Stan. Well I thought here was something I could check and I sent the equation to a sympathetic physicist I know. His integrity for me is unimpeachable he gave up a very lucrative business to devote himself to pure research and to teach. I will let him relate to you what he thought of the one page of equations. He reminded me of something very important “mathematics is easily checked” and he welcomes anyone to check his conclusions themselves.

The equations presented to me of one page have some issues. In general, these equations are commonly used in electrodynamics, wave equations and gravitational studies; however, without even going into detail of the equivalences of lines one, two and three, there are some problems with the basic forms of things;

1. When using the approximated expansion term on the sixth line for "k" with the Laplacian operator of the first line, first term, it is equal to zero after performing the spherical coord scalar laplacian operation, it is odd to show a long equation with the first term equal to zero. It is also strange to show the first 2 terms of line 6, it is trivial to show "k" is the square of the square root, why do it?

2. I assume the "k" here is the wavenumber, if not, and one uses "k" from the approximation, the unit are still incorrect. The fourth line is omega (I assume and not "double u"), the angular frequency, and if so, is not defined correctly. It should have dimensions equal to "2*pi/seconds"; however, the units are "2*pi/meters2" and are incorrect.

3. The seventh line is a modification for a "Gauss's law" variant involving the displacement field vector "D", in defining the total charge "Q". This equation helps to find the field due to free charges with a spherical field distribution (how it is shown with 4*pi*(assumed to be r^2).This equation is found in most E&M books, but the units are not correct. The "sigma2" should be "r2", where r is the radial distance, not the surface charge density sigma. Here "k" is used as the dielectric constant, or the relative permittivity given by "epsilon/epsilon_0".

Directly below it a copy of Stan Equation please feel free to check them yourselves: 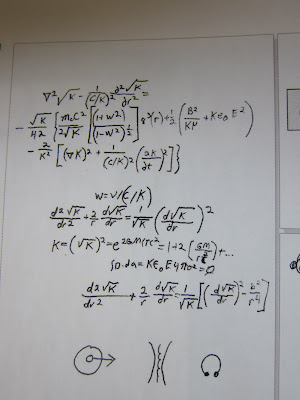 Do I think Stan had most of these experiences, yes I think he did. Do I think the Stan Romaneks’ documentation on his abduction part of his experience has some serious question, I’ll let you be the judge of that.

Thanks to Nicole of IUFOC for permission to show his full presentation.