MUFON’s Bonfire of the Vanities

MUFON "members" are in an "uproar" over a series of videos on You Tube which showcase and critique Texas MUFON Director Ken Cherry. (Presentations below) Cherry decided to point out what he thought were some real problems inside MUFON and he did it the old fashioned skeptic/debunker way: by attacking the people. Some of the members are angry because some Stephenville witnesses and the examination by MUFON of radar tests were his main targets. He went on to smear the 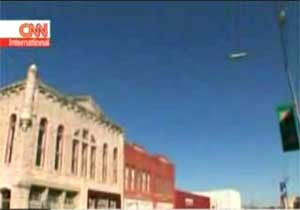 pilot who he thought had mental problems because he wanted to seek counseling over the close encounters. Oh, what a cold hard world Cherry lives in where everyone has to conform to his idea of what a "normal" witness is.

Cherry claimed Puckett, a meteorologist who did independent analysis of the radar tapes, showed how MUFON's analysis was greatly flawed. But Puckett is quoted as saying basically that there was some problems with the radar measurement and MUFON fixed it and that is was no big deal. Cherry had admitted in his presentation that there was a great deal of pressure to get the results out quickly so the mistakes made were probably innocent human error. Cherry, using quotes out of context, innuendos and sarcasm, paints a self serving portrait of himself that leaves only Cherry, and those that agreed with him, standing.

There are actions taken by many MUFON professionals, who we all respect, which I believe can be counterproductive toward good potential UFO witnesses. However, we find good old Cherry is part of the problem. In his presentation, Cherry relates how he was chasing potential UFO witnesses (to be interviewed for UFO Hunters) out of the room because of his two second psychological profile and mind reading. Cherry considered these "weirdoes" undeserving of going on TV. . After all these years of MUFON experiences (humble) Cherry doesn't realize UFOs appear to the strange also! First of all, if you are a good hoaxer, would you act strange? Suppose a kind of weird person had entered the room with almost smoking gun evidence. This character, good old Kenny, would chase them away because of the strange glint in their eyes.

His whole attitude is one of dismissal and sacasim. The bottom line is: how this is helping MUFON?

There are general concerns about MUFON. Many people I know (members/investigators) for years are very unhappy with some decisions made by MUFON. They said for years they have been trying to change MUFON from the inside. They claim, and I think it is valid, that MUFON spends more time debunking UFOs than proving their reality.

For example, the last issue before this "MUFON Journal" had photos of UFOs and Mars from the great "Filers Files:" you know the one many of us love on the web. But, there was a difference. Each photo was explained away by Marc D' Angelo, MUFON's optics expert. Sounds fine, right?- educating the members, etc. But think of this, there was not one photo that was presented, that couldn't be explained.

This was the same thing Marc D'Angelo did in his presentation on at the International UFO Congress in 2010. He never presented one case where a UFO couldn't be explained.

I think I live on the same planet as MUFON and Marc. I know that there are photos out there in the Filer Files and on You Tube that anyone would be hard pressed to explain. But MUFON and Marc felt it unimportant enough to present that part of the UFOs reality. This is the insensitivity born out of kissing the mainstream skeptic's ass. MUFON doesn't have the courage, or they just don't believe there are any new photos or videos of UFO objects and craft that can't be explained. What they promote seems purposely geared only toward the explainable.

Cherry's arrogance and destructive behavior is not new in MUFON. What is new is how public it has become. This all started decades ago before MUFON. Many of us wonder what happens to our good people after they organize this UFO organization to look for answers. It seems they self destruct or disappear slowly.

Infiltration by intelligence people without good intentions toward MUFON may be at hand. This seems to have happened in previous UFO orgs in the past; NICAP is a prime example. Either UFOs are real and important on some level to the government, or they are not. The evidence over the decades indicates strongly the government is involved in covert operations around UFOs and the witnesses. That can make you "weird".

Cherry sarcastically criticizes Linda Howe for her way out theory on one report in Stephenville. However, later on he seems to support Dr. Steven Greer whose own public nonsense assertions ended any future su

ccess for the "Disclosure Project". For those who don't know Dr. Steven Greer, he claimed the government had cloned aliens and wwere abducting people to start a war. After that claim the press never showed up again. Well, at least Greer has no strange glint in his eyes. Cherry attacks Linda Howe indicating she is a fake UFoLogist. There are no schools for Ufology so Cherry can't define it. The skeptics don't even acknowledge Ufology, they lump us all together as UFO enthusiasts. I have to bring this guy Cherry to New York I know some people who could really train him in human psychology, he thinks he is savvy, but he's not.

Ken Cherry also criticizes Robert Bigelow because he has his own investigators that interfere with MUFON. It is interesting to note that Bigelow and his investigators are at odds over a recent case in Capri. MUFON quickly dismissed the UFO images caught by the firehouse video web cam as the moon. Then, in steps Bigelow's investigator's called the "Advanced Study Group," headed by Gary Hernandez, and we get the other side:

"Hernandez said he did not agree with MUFON's conclusion that the photo captured by the Isles of Capri Fire and Rescue Department's webcam was likely the moon setting and the photo could not have been of the planet Venus, said Hernandez. Although the photo was small, there is no way that the dates, time, and weather conditions would support that conclusion," Hernandez said."On the night of March 27, it was raining sideways, the wind was gusting to 51 mph, and the sky was black," said Hernandez. "Skies were dark as well for the next two nights .Hernandez plans to study the photo further and speak with witnesses to gather additional information."

Here are four links to the part of Ken Cherry's presentation sent to me by David Fulton the full presentation, according to David, will posted in eleven parts.