Postcards from the Edge: Report From The UFO Congress

[Be;ow are some clips with night vision, all but one, UFOMM claims are satellites. Also as a bonus I've included the entire presentation by Travis Walton at the UFO Congress. He's coming out with a new book about the case and what happened afterward. It was just great, enjoy,jc]
Note: Fixed Video Clips

As I walked through the pathways between the hundreds of slot machines and their robotic players at the Aquarius hotel in Laughing, Nevada, I understood more than ever how easy it is to fool humans. Most of the players were gray with age and sat almost transfixed at their one arm masters as they puffed occasionally on a cigarette. As I continued toward the Congress, I thought humorously; “ they would probably think I’m the one that’s crazy”.

I went to the International UFO Congress in Laughlin, Nevada to test out our night vision monocular, hear Travis Walton, and hopefully go out with Ed Grimsley.

UFOs: In The Heat of the Night Part One and Two

On the first day, I found Ed with his good friend, Bill, strolling in the books and DVDs room at the Congress. I immediately went up to him and asked him if he was having nightly spotting. He told me they had a table and, yes, he with Bill, are going out and had to charged twenty five dollars per person to offset the cost of his room and other expenses. 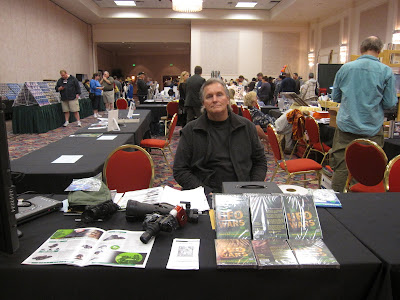 This year’s UFO Congress was stacked with two hour spiritual ET and or Nazi conspiracy speakers. Vinnie who came with me from the NY UFO Meeting Group was in a state of confusion with topics like; “Inside Starships: A visionary journey to life on other planets” , but to his credit Vinnie was able to sit through the nonsensical and press on to more credible speakers like Travis Walton. Since that type of lineup was not my forte, I and Vinnie had more time to work with the scope. The first night, Sunday, Ed went out it was too cloudy and cold for me to attend. Monday night it was clear. Ed, with his scopes, and we, with ours, went out to the known spot. There is a saying “the best laid plans of mice and men” and this seemed to apply. 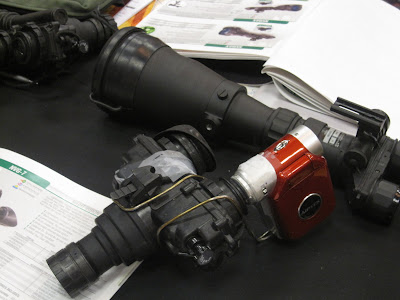 It was so cold and windy out there that setting up the scope and working with it was impossible. As I became colder and colder I could imagine “died watching UFOs” inscribed on my tombstone. I went back to the room, but Vinnie stayed. Nothing significant was viewed that night.

Tuesday, it was still real cloudy and very cold but Vinnie wanted to go out with Ed again so I sent him out with the scope. Vinnie had some sightings. Although the rest of Ed’s group viewed one sighting with multiple ships, Vinnie missed that one. (By the way we did not have our “Night Enforcer” scope focused properly. I think that is why we missed some of the objects.) 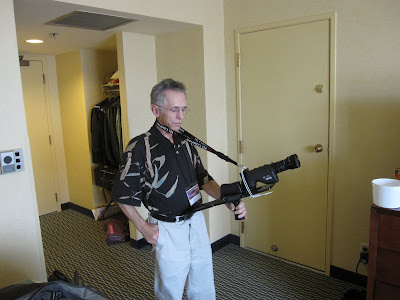 Wednesday was a washout with constant clouds. Thursday, Vinnie went out with the scope and he was able to catch one object which may have been something but all in all they were probably satellites. They were not what we saw last year.

I have to say, having briefly examined Vinnie’s video, and listening to Ed shouting in the background that the two objects Vinnie followed were UFOs, when they were most likely satellites, doesn’t help his credibility. Slow down, Ed. Ed’s spotting excursion this year weren’t as coordinated or as equipped as last year. When you add the clouds and the wind, it was miserable for spotting anything. But onward and upward, maybe next year in Phoenix we will have better luck and this time catch them on video. 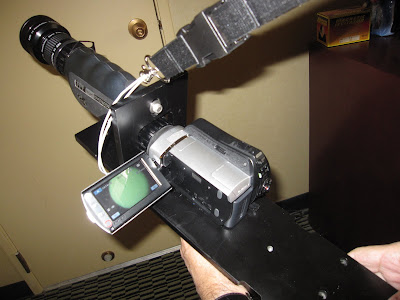 International UFO Congress will now be produced by “Open Minds” and this may mean a balanced Congress next year. . The Spot for the 2011 International UFO Congress is brand new casino on an native American reservation a few miles outside of Phoenix. It has to be better than the Aquarius Hotel.. They announced they will be having “Night Visions UFO Spotting” which should be interesting around that area. I spoke to Alejandro Rojas about my concerns for a more balanced venue.