UFOs: In the Heat of the Night Part Two

The six distinct UFO sightings we had with Ed Grimsley's night vision equipment left an impression on us. After the UFO congress Gary, myself and, let's say my other friends' (whom we will call "John"), discussed the idea of splitting the cost of getting our own night vision scope. The experiment we wanted to do seemed simple yet important. If we could video these objects in different states by different people we may be able to determine that these objects may be witnessed anywhere with this grade or higher grade scopes. However, the money was just not there so we let the idea wait for the moment.
Two weeks late 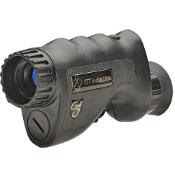 r John called me and told me he had spotted a Generation 3 night vision monocular on EBay for $900.00 dollars. It was ITT Night Enforcer 160 Gen 3 Night Vision Monocular. We all decided to spit the coast of the scope and a 3X lens accessory we found.

[Note: If you are buying used scope, it is very important you have a solid idea of the lamp
light lifetime of the scope. The lamp light is the heart of the scope and to replace them cost almost as much as the entire purchase price of the scope. Check on the model lamps specs and discuss how the scope was used by the seller. The less lamp hours used, the better.]

We then had it shipped up to John who was working on a camcorder adapter to fit the scope. Trying to find a camcorder adapter was a problem from the start because this model wasn't really built for a camcorder. As John was continually working on the adapter problem we encouraged him to try out the scope and see what happens. For the first couple of days he saw nothing. He wasn't impressed with the scope till he put on the 3x lens. Then the stars were all over the place. He went out sporadically after that because of the bitter cold but on one night he witnessed three objects he couldn't explain. He called me up, very excited, the next day. The most pronounced object was an "oval sphere which stopped in mid flight and reversed itself in the other direction". He wasn't seeing them every night but we had gotten one positive and that was good enough for us to keep going. By the way, he also saw satellites with the scope; this was not satellites or planes.

The camcorder adapter became more of a problem. Whatever we tried didn't seem to work, especially with our Sony cam 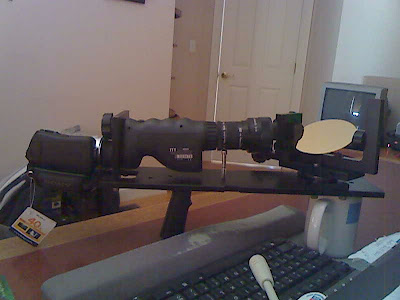 corder. We were about to" jury rig" the scope and camcorder using masking tape when a scientist we knew kindly offered to build an adapter. He had access to a full tool shop.

When the adapter was finished, it was cool looking. The adapter (pictured here) was built with a parabolic mirror that you can use instead of pointing the scope up. This helps prevent neck strain. He suggested that it be used with a good tripod, which was fine with us. It took us time to put this idea together, more time than we expected, but the scope was ready right before we were going away to this year's UFO Congress. We will be able to test our scope in the same spot as last year. I was told Ed Grimsley had called saying he wanted a table at the Congress. If this turns out to be true and Ed brings his other scopes we can always join him giving all of us a better chance to see something and film it.

I believe the future of UFO investigation will be with high tech gear and tactical teams. No matter how well you cloak these UFO ships visually they still will give off heat. Ed believes that right after sunset is the best time for viewing because the sun's heat help the objects hide from the scope. I know about the range of these scopes but you can see the heat source of a satellite and they are very high up. As far as how high up they are, we don't really know but you get a sense they are pretty high up especially if you scope other objects for comparison.

These whole project is for me a type of "a pass it on" project. Ed gave this gift to me and I hope to pass the gift along. Perhaps, in the future, the defining moment of UFO evidence will not be found in the daylight, but trather, in the darkness and heat of the night.

Some Night Vision From You Tube: