“…because something is here happening here but you don’t know what it is; do you Mister Jones?”
Bob Dylan.

1. Rumors in UFO field: “the year 2007 is special” - not that unusual in UFO community to claim this may be the “Year”

2. On January 1, 2007, The O’Hare episode hits the media and is reported all over the world. Pilot states publicly: He reported it because is wasn’t an “object it was a craft”. Olbermann has a scientist on who challenges fellow scientists to admit “they just don’t know.”

3. Buzz Aldran, second man on the moon, discloses a UFO followed Eagle One. The same Buzz Aldren who laughed at UFOs a year ago.

4. Dr. Lear continues to test “Roswell debris”- conclusion from a number of labs-
“manufactured and non terrestrial.”
5. Jesse Marcel son’s book discloses new and pertinent information on Roswell, including how he was questioned by congressmen in “bug proof “room in the capital building.

6. Two pilots of two separate passenger jets, off an Island in UK, see “two one- mile long UFOs” with confirmation on radar. People on board also see them. Pilot: “I have never witnessed any thing like that in all my years of flying and I hope I never do again.”

7. Crop circles start to gain more respect as even more complex circles are formed. Two are formed in minutes while researchers are there - lights are caught on video and infrared. 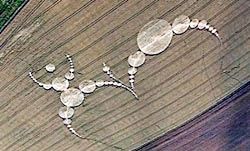 8. The History Channel releases “The Brazilian Roswell Incident’ which clearly proves guided intelligently controlled UFOs were filmed and measured by the Brazilian Army for four months. Some classified documents were eventually released. Over 90 people were wounded by beams shot from these UFOs.

9. Walter Hunt, communications officer during the Roswell incident, dies, releasing posthumously, sworn testimony that he saw bodies and a craft.

10. MJ12 papers gain more respect with each passing year as corroboration of the action of players are found in the archives; some of which could not have been known except by someone very high up in the government.

11. UFO videos hits U-Tube with a vengeance. People are startled to see some of the evidence that has been out there. UFO blogs take off. Debunkers loose credibility.

12. Globes of light are filmed and photographed by hundreds in the streets on July 19, 2007 in Stanford in the UK.


In the history of UFOs there had never been a flap of sightings that compared to Mexico’s. This is now spreading to Peru. The Mayans predicted the “sky masters” would return after an eclipse in the early 1990’s – is it time to see who they are.

Are we seeing the beginning of discloser by ETs of their presence?

Statistically 2007 should be nothing more then good year of UFOs reports, but then there is Mexico’s and now Peru.

Note: Roswell for me will never be over because Roswell is more than UFOs and aliens. For me Roswell is about the people who come forward to face ridicule and the dismissive nature of society. To this day no one has proved the over all body of testimony was not the absolute truth. Pretty good after the debunking combined efforts of spin specialist including: government, media, and scientist and UFO researchers.
I never had to face crank phone calls, having my children or grandchildren beaten up or even harassed in school because of what I did. I will never forget or stop writing about the courage and integrity of UFO witnesses including those at Roswell.