Was Roswell A Plant?

Could the famous Roswell crash be a modern day Ancient Astronaut intervention?

Could alien beings have decided after the Second World War to leak some of their "primitive technology" to the United States to help us in the future? Many inside the UFO community believe in the Ancient Astronaut theory. That theory states that 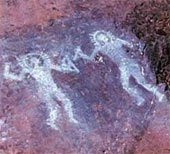 ETs were involve with ancient empires by helping them with their technology. They seemed to have presented themselves as sons of the Gods to the natives. Has this stopped? I fervently believe that in no way did the ETs give an anti-gravity machine to any ancient civilization. We find some claims by the ancients but a simpler answer is they were sowing their own brand of disinformation (scare the hell out of your enemies). I do believe, at that time, ETs helped these empires using technology, disguised as magic, and these ETs were in total control of these gadgets at all times. How could they do this today in our world and who would they pick? Would they present themselves as gods to a now technologically based society? I doubt it.

Why was the ship at Roswell left by the ETs to be discovered? Considering all the length these entities go to so their true natures won't be discovered, why didn't they know they had crashed? It seems obvious to me the recovered technology reported reflects a technology from our near future, not a distant one. Why were their bodies left to rot? Are you trying to tell me there are no intercommunications between these spacecraft?

There is a great deal of unanswered questions around these crashes. I will deal with the Roswell case because that is the one I believe really happened. Something doesn't make sense. We know that whoever or whatever is behin

d the UFO sightings does not want us to capture their craft. Anytime our planes tried to bring them down it was disastrous.

So here comes the Roswell crash, a smorgasbord of technology and alien bodies given to us on a silver platter to figure out. Yet we haven't had a hint of alien intrusion to try and stop these supposedly disastrous blunders. We all know one technology that was retrieved at the Roswell site: pieces of the wreckage. The memory metal and I beams are not in dispute. What do you think about those pieces? Were they a thousand years in our future technological development, a hundred, fifty? At this time I believe we will have that technology in less than fifty years. It certainly doesn't reflect the technology being witnessed and reported now, or even at that time.

Some may counter, "Well, Joe, don't you remember there were dead aliens and a live one?" What did they do kill some of their own? First we have to ask, was there a live alien at all? From the history of Roswell this story has two sides. One side claims the ETs they saw were all dead. The other side; one was alive. If they were all dead. Remember we really don't know how they died could the bodies have been a plant. Even if there was a ET that was alive many humans volunteer for very important possible death missions and this would certainly have been one. We have to also consider the big question- do they really die?

Why America you might ask? If you believe ETs are spiritual and compassionate or even just practical then America was the country. The ETs monitored the war and knew we had developed the Atomic bomb. The stakes had changed and if they had bases they were in danger. The United States was a country whose population represented almost all of the diverse cultures in our world. In those times America didn't want war .We were horrified, as a nation, at the horrors the Germans had inflected on the Jews and other minorities. We were starting to grow up as a nation. We had a well informed citizenry to mould the country's future. America was the shining star of freedom for the future. In the past it seemed ETs pick Empires on the brink of greatness America may have been another example of this.

Recently Tony Bragilia presented yet another example of a witness to the crash of a spaceship in Roswell. I would say a very high percentage of UFO skeptical researchers and people in the UFO community have come to the conclusion that the explanation of what happened at Roswell can only be defined now as an ET Spaceship.
http://ufocon.blogspot.com/2010/06/military-base-firemen-claim-we.html


Kevin Randle now admits the most probable explanation for Roswell is a crashed ET craft. Randle, in his new book, also gave credit to Don Schmitt's continuing research even though they had a parting of the ways. I feel that is a good deed and helps in getting at the whole truth. I wrote an article on Schmitt and Kevin's parting of the ways here:
http://ufomedia.blogspot.com/2007/11/unforgiving-redeemed.html


Below are the clips from the Lieutenant Colonel
Philip J. Corso interview, but here I want to chide S. Friedman on his ideas about Corso. First he was head of the foreign technology unit, for Stanton to compare his clearance and they way it was handled with Corso's and his insider clearence is ridiculous. Second, the idea that this man would ruin his credibility, in the majority of the public's eye for a book sale should be unthinkable considering what he was involved in trying to bring our boys home. Isn't it more likely that his book "The Day After Roswell" was half truths used to leak some information to the public, as a safety net for his family, along with disinformation aimed toward our enemies? Anyone with his knowledge and expertise would know easily how to do that. I feel Stanton has dismissed Corso to easily without truly understanding the implications for anyone who would leak verifiable smoking gun information on a secret "higher than the H-Bomb"; Roswell. Many agree within the UFO community that in the 1990s some in the government wanted the truth out. How could you do that without being in real trouble? Maybe Corso found a way.

So if the UFO community can stop arguing over whether the Roswell crash was an ET, then we can start to discuss how a civilization as advanced as what we are continuing to witnesses could have ships that crash at all.