Or: " you can fool some of the people all of the time."AL

Unlike any other whistle blowers, those who have come forward on this subject have a hell of a time proving they are telling the truth No matter what credentials ufology whistle blowers have on board --or, as in June Crain’s case, regardless of the tremendous fortitude of character demonstrated throughout an individual’s life-- few individuals can survive the character assassination of the professional debunkers. No amount of circumstantial testimony warrants a serious look at the kind of blatant, carefully coordinated attacks the whistle blowers of ufology have been subjected to.
The only thing these attacks and character assassinations are really good for, is recording the history of methodology professional debunkers and their shadowy sponsors have been using the last three-quarters of a century to delay discovery.
After all is said and done where are the pictures?
THOSE NASA PHOTOS.
I will only post pictures where I can go to NASA’s official web site and pull them up myself. I posted these photos because they are so obvious. 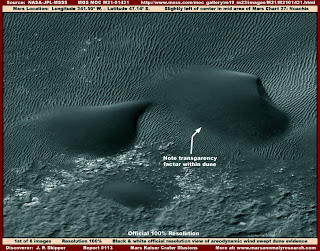 For the more astute, like my wife, you don’t need to look any closer. She decided what it was right away. But for rest of us mere mortals: 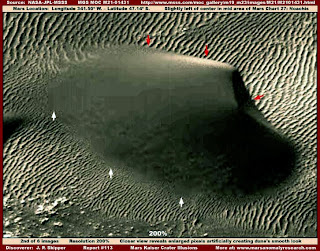 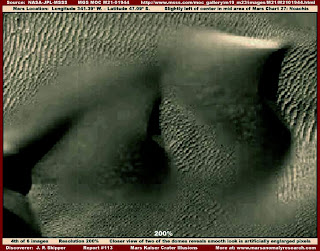 The skeptics say: Trust your daddy. I say trust no one use your own eyes. Something is under these "brush stokes" (as my wife put it).

There are people who do a great service to help inform us, but they are given little credit. These people are part of the Fair Play, aka, Transparency Movement of the Internet. I pray this movement stays around forever. The service these individuals provide can never be underestimated in our search for what is real. On the Mars subject, photo analysis of Joseph P. Skipper and his "Mars Anomaly Research" web site is a prime example of the Transparency Movement. Skipper has drawn attention to repeated examples of NASA’s tampering with Mars photos. But I think even he was surprised, when the pictures came off the NASA presses! And note that all these are from the same series of photos at different resolutions. When you go to the site look around it wonderfull. Here are some other examples of digital manipulations.

I exist in a Future Shock (Alvin Toffler) reality, day to day. I’m shocked as I witness the public today accepting things that would have brought a million of us out of our houses to the street in loud but peaceful protest in The Sixties. That effective, mass peaceful protest, to me, is Democracy, capital D. I don’t think we all realize how close we’ve come to living in a type of Orwellian 1984 State, witness:
--the almost messiah tone the right wing, through certain Christian sects, bestowed on Bushs’ bad decisions.
--assaults on basic American decency via the tv and particlarly evident in the senate and house races in those horrible ads.
--increasingly invasive technology designed by big business with the bottom line as the only judge of its morality, like dangerous X-rays at airports, ID chip implants proposed for children, total examination of all email sent by private citizens in the US in the name of Homeland Security.
In all The horror we have faced these last few years. Who could we count on for the truth?
Not the news media. Not the pundits telling you to believe unconditionally in our institutions and our government, and in global corporations. In fact, all these great institutions failed us around the ongoing Iraq war and post-9-11 assault on our Constitution. Science --which is also in the pocket of the government-- and big business, both, failed us around the Iraq war and the assault on the rights of individuals but mostly in the pursute of pure science. There was a great yell over Global Warming…finally. But it came out this loudly because it had to be said. Science had to shout laudly time was and is running out.
What was and is saving our ass now is the People, people acting through the uncensored internet. It was the people learning the truth, doing the work, and putting it out there, without spin...or institutional approval.The people, who are minimized and dismissed every day both by media and the skeptics, the people did not fail us.

It is the new Paul and Paula Reveres shouting out that are saving the day. It’s never perfect, our freedom of the public information space. And thank God for that. The Paul and Paula Reveres, they brought our attention to what was really happening. We know their messages are true because we are still generally free to partake of the greatest gift imaginable: the gift that is the freedom to choose. That gift is dependent on the heart of our Constitution: Free Speech.
On the other side of the coin.
There are some very sloppy research by many UFO individual researchers and groups this helps increase the dismissive power of the skeptics. Some of the conspiracy research has been sloppy and misleading. That’s why it is so important to check out an organization like MUFON, where demonstrably rigorous research is being done on ongoing, as well as historic, cases. Most recently, an unfolding-as-we-speak case MUFON’s investigating that’s a standout in all North American ufology, is the farmer who shot a being.