The Damndest Story I Ever Heard

Plus:
Has A 50 Mile-Long Spaceship Landed
On Greenland?

"…Summer of 1942 near Tasmania off Australia. The Royal Air Force were assigned the duty to investigate “mysterious lights” being seen by fishing boats on the sea at night, this was the Brass Strait:
“Major Brennan and his crew then spotted an object in the clouds. At 5:50 P.M. in a lovely sunny evening, we were flying some miles east of the Tasman Peninsula when [all of ] a sudden there came out of a cloud bank a singular airfoil of glistening bronze color. I’d say it was around 150 feet long, and around fifty feet in diameter. It had a sort of beak at its prow, and the surface seemed buried, or rippled or fluted. In its upper surface was a dome, or cupola, from which I seemed to see reflected flashes as the Sun struck something, which might or might not have been a helmet, worn by something inside. The other end of the airfoil thinned out into a sort of fin.

Every now and again there came from it’s keel greenish-blue flashes. It turned at a small angle towards us and I was amazed to see, framed in a white circle on the front of the dome an image of a large grinning Cheshire Cat! The damn thing flew parallel to us for some minutes, and then at it abruptly turned away and as it did so it [showed] four things like fins on its bell-side. It went off at a hell’s pace, turned and dived straight down into the Pacific and went under throwing up a regular whirlpool of waves. Just as if it had been a submarine”.

The crew kept quiet about this and reported it only to a UFO researcher years later, “…because if we had [reported it] we would have been grounded”.
From the book Strange Company, by Keith Richards

Cheshire Cat Origins?
Wikipedia points out interesting origins of Cheshire Cats, aka Chester cats:Cheshire is a dairy county, long noted for its cheese and dairy products, and there used to be a cheese warehouse on the banks of the river Dee in the county town of Chester, when that fair city was also a port. The port cats were said to assemble on the dockside and await the rats and mice that would leave ships when they docked ready to take on a cargo of Cheshire cheese. This made them the happiest cats in the kingdom —hence their grins!

The Cheshire Cat is a fictional cat appearing in Lewis Carroll's Alice's Adventures in Wonderland. The character is derived from an old English simile, "grinning like a Cheshire cat." It appears and disappears at will, engaging Alice in amusing but sometimes vexing conversation. The cat sometimes points out philosophical points that annoy Alice.
http://en.wikipedia.org/wiki/Cheshire_Cat

Instead of just dismissing as a wild story the RAF report of the bronze-colored vessel with a smiling…something in it disappearing beneath the waves, I did some digging on the Cheshire Cat. I wondered what it could possibly mean. It was unsettling, to say the least.

That report added so much depth and complexity to the ET psyche, it was downright scary. For decades I found these reports interesting, but never thought they meant any thing…just another strange aspect of the ufology enigma.

But now I wonder…maybe we should start really thinking about it. What if there’s an ET message behind these Cheshire cat smiles that recur now and then in ufology reports?

Could the ETs know us that well? Do they dig that far down into our psyche? Wouldn’t they need to know us very well, if they had to stay on our planet, hidden?

Is that what’s been going all along? That they’re hinting how well they really know us?

On one night, in 1942, did one visiting alien blow the mind of a resident alien with the truth…transmitted in an enigmatic smile?

I don’t like to think there is something smarter then humans. In the movies when the evil aliens are planning an attack, we --the earth people-- nearly always find a way to defeat them. We defeat them because the aliens never seem to know what the human species are really capable of.

They don’t know us deep down. According to the movies.

But in real life, is this even close to the truth?

I know some will dismiss the alien with the Cheshire cat smile in that bronze ship as imagination or a trickster-type event. But couldn’t we be wrong? I wonder if this alien was saying that his species stood …. smiling… on a distant shore…waiting patiently for something….

Waiting for what? That’s what’s really got me worried.

Damdest Video: From DVD J. Maussan "& 15 Years Of UFO in Mexico Part One"

I received an e-mail before Christmas from a friend who wanted me to take a look at Greenland. The rumor going around was, a military insider leaked a report that a 50 mile- long ET vessel is parked in Greenland trying to reverse the effects of global warming.

So I did go to the Google map, and right there, close to the bottom of Greenland, was this dark triangle! You can see it clearly from 200 miles up. Next, I went virtually all over the Google Map to see if this was some type of photo error or blemish. But I found no other anomaly like this. 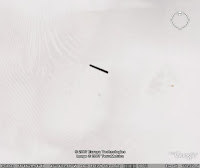 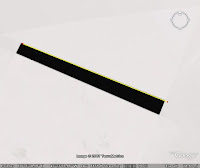 I wonder if this anomaly might instead be some type of military base, intentionally hidden. What I see on Google’s Greenland certainly looks like tampering of some kind. The anomalous area is perfectly black. If you wish to look for your self it is near the bottom of country and about centere, hard to miss it.
Does anyone know what this is? Please leave a comment or e-mail me at ufomm@optonline.net